Transition metals are the d-block of the periodic table and therefore have unfilled d-orbitals in common oxidation states. Technically, zinc, cadmium and mercury aren’t transition metals, as they have full d-orbitals, they are generally included anyway.

Trends of the transition metals:

The electronic configuration of the transition metals is important, as it is the partially filled d-orbitals that are at the root of the interesting chemistry. For the most part, the electronic configuration is predicted by the aufbau principle (which we will cover in greater detail in week 10, but you should know from school. If you’ve forgotten, here’s a worksheet for you.)

Scandium, the first of the transition metals has the configuration [Ar]4s23d1, (remember that the 4s fills before the 3d), and you continue along the period, adding in one electron to the d shell as you go. There are, however, two exceptions. Chromium: [Ar]4s13d5 and copper: [Ar]4s13d10, as the half filled and fully filled d shells are more stable than a full 4s shell. 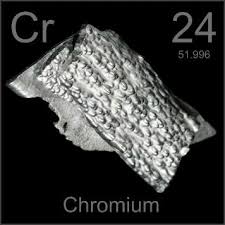 Chromium - breaking all the rules

Transition metals all have high melting and boiling points, though some are higher than others.

The melting/boiling point is related to the strength of the metallic bonding, which is determined by the number of unpaired d electrons. The first 5 elements have increasing numbers of unpaired bonds, but they start to pair up after that.