Knowing how to determine the relative strength of organic acids and bases is the key to understanding, (not just memorising) the organic reactions that make up the rest of this organic course.

You already know that a strong acid is a molecule that will readily donate a proton, and a strong base will gain one. You should already know some strong inorganic acids and bases, but you may not know many organic ones. That’s okay – this isn’t a place to memorise a great big list of compounds, instead you just need to know three rules, (and the reasons behind them) and remember one important thing: it all comes down the the stability of the conjugate acid or base.

There are three things that will influence the conjugate base/acid’s stability:

Let’s start by looking at how the acidity is affected, then deal with bases later…

Electronegativity is the measure of how strongly an atom attracts electrons. It increases across a period and decreases down a group – i.e. fluorine is the most electronegative element, and francium is the least. Highly electronegative atoms are happy to hold a negative charge and exist as their negative ions.

There are two parts to how electronegativity dictates acidity:

a) the atom bearing the charge in the conjugate ion:

The atom bearing the charge in the conjugate ion is the more significant of the two effects. If the charge-bearing atom is highly electronegative, (fluorine, chlorine etc) the anion (conjugate base) will be more stable than if you had an electropositive atom in its place.

The acidity of a compound changes with the hybridisation of the carbon. Ethyne (sp) is more acidic than ethene (sp2) or ethane (sp3), for example. Orbitals with higher s character, (a higher proportion of s orbital to p orbital; sp orbitals have 50% s character, sp2 33% and sp3 25%) are more stable, as the electrons in s orbitals are close to the nucleus. It follows that in an anion, electrons would rather be in a high s character orbital, as they will be closer to the nucleus and therefore more stable.

An anion that has a resonance form is going to be far more stable than one where the charge is localised to one atom. Spreading out the charge through resonance will increase acidity. We will talk more about resonance stabilisation in a few weeks.

To summarise, having electronegative atoms, carbons with high s character and resonance structures for the anion will all make a compound more acidic. Of course, they will also make something a weaker base. A strong base will have electropositive atoms, (to hold the positive charge), low s character and will not be able to form resonance structures.

Naming organic compounds can be a bit daunting, as there are a lot of rules and the names just get longer as the molecules get more complex, even if it is something familiar to you. Do you recognise the following names? 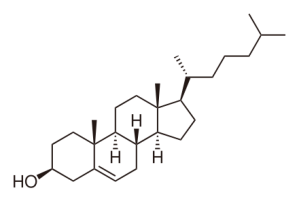 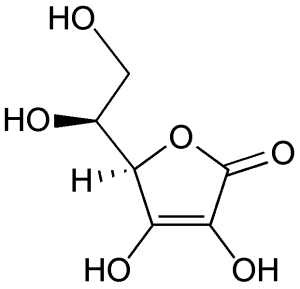 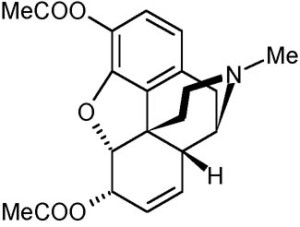 Once you get the hang of it, naming organic compounds is really very easy, and I will demonstrate with the following molecule: 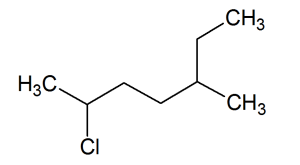 First thing to do is find the longest carbon chain.

Then identify what functional groups, (if any) are present:

We have one methyl group and one chloro group

Now we number the carbons on the chain, so that the largest number of substituents have the lowest number:

Now we put it all together remembering that we order the substituents alphabetically, a hyphen goes between a number and a letter, a comma goes between two numbers and there shouldn’t be any spaces, (except when the functional group requires it).

So… that gives us: 2-chloro-5-methylheptane!

Here are some links to some practice questions:

The order of precedence of functional groups can be found here

A nucleophilic substitution reaction occurs when a nucleophile (link to nucleophile post) reacts with the substrate to replace the leaving group. This reaction can occur via two pathways – Sn1 or Sn2. We’ll start with Sn1.

The Sn1 reaction occurs in two steps, the first is the removal of the leaving group from the substrate, and the second is the addition of the nucleophile to the carbocation.

Formation of the carbocation

The formation of the carbocation is the rate-determining step, (the slow step that determines the overall rate of the reaction), and as it relies only on the concentration of the substrate, the kinetics are first order – hence Sn1.

In order for an Sn1 reaction to occur, the carbocation formed in step one must be stable enough for the leaving group to leave without causing a reverse reaction. Carbocation stability depends on the number of alkyl side groups attached to the positively charged carbon – the more substituents, the more stable the carbocation is:

In order to create a carbocation at all, the leaving group must be good enough to detach from the substrate on its own.

By going through a planar intermediate, Sn1 reactions lose any stereochemistry, as the nucleophile is free to attack from either face of the carbocation. The product of an Sn1 reaction will always be a racemic mixture.

The Sn2 reaction occurs in a single, concerted step, the rate of which depends on both the nucleophile and substrate concentrations.

The nucleophile attacks the substrate from the opposite side to the leaving group, (backside attack), pushing the leaving group away. This results in an inversion of stereochemistry, known as an umbrella inversion or Walden inversion. Of course, if you start with a racemic mixture, you’ll end up with one.

Now you know all you need to in order to distinguish between Sn1 and Sn2 reactions.

In an elimination reaction, fragments of a molecule are removed from adjacent atoms and replaced with a double bond. There are two mechanisms for an elimination, E1 and E2.

The E1 reaction starts in the same way as an Sn1 reaction: the removal of the leaving group to form a carbocation. The nucleophile can now either attach to the carbocation and reaction becomes a substitution, or it may act as a base and take one of the hydrogens attached to an adjacent carbon. If this occurs, the elimination product is formed.

E1 reactions will occur under similar conditions to Sn1: they must form a stable carbocation and have a good leaving group.

E2 reactions are bimolecular eliminations, with the elimination occurring in a single step

In order to distinguish E1 from E2, you need to ask the same questions for Sn1 and Sn2, the only difference is that a strong base is required for E2.

Nomenclature of cycloalkanes is simple, and follows the same rules as for any other alkane. The prefix cyclo- is added to the basic alkane name, and any substituents are added in the front.

Cast your minds back to types of isomerism, and you’ll remember that we discussed conformational isomers. These are particularly important in cycloalkanes, as the molecule is locked in a cyclic arrangement and cannot rotate out of an unfavourable conformation.

The most stable conformation for cyclohexane is the “chair conformation”, called so because it resembles a reclining chair. This conformation is the most stable as all carbon-carbon bond angles are 109.5 degrees, which minimises strain and, as the Newman projection shows, all of the substituents are in staggered conformations.

See? If you squint a bit, it looks like a cyclohexane ring

The most comfortable conformation

At room temperature, cyclohexanes rapidly flip, via the boat conformation, from one chair conformation to another. This ring flipping is important, because when the ring flips, all of the bonds that were axial become equatorial and vice versa.

If there is more than one substituent on the ring, you want the bulkiest group to be in an equatorial position. The gold standard example of this is a tertiary butyl group:

This group is, comparatively, huge, (try making a cyclohexane ring with a tert-butyl group on it with a molecular modelling kit. You’ll see that the tert-butyl group is almost as large as the ring itself), and must always be in the equatorial position.

Alkenes are hydrocarbons that contain a double bond between two carbons, and are sometimes referred to by their old name, “olefin”. You might see this in some older, American textbooks.

Double bonded carbons show sp2 hybridisation, rather than sp3, (alkanes). In sp2 atoms, the s orbital has hybridised with 2 of the 3 available p orbitals, forming a trigonal planar arrangement of 3 sp2 orbitals.

This arrangement leaves a p orbital unhybridised, which sits perpendicular to the plane of the sp2 orbitals. This p orbital forms the pi bond of the double bond. 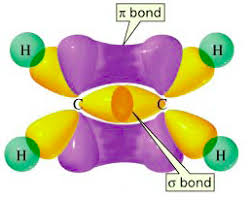 The nomenclature of alkenes is much the same as alkanes:

Cis and trans can be used to designate the geometry of an alkene, provided it is disubstitued.

As soon as the alkene is tri or tetra substituted, cis and trans become meaningless, so E/Z is more correctly used for alkenes. (note: cis/trans is used for cycloalkanes).

Name the following alkenes, including E/Z and R/S geometries where required:

Isomers are compounds, which have the same chemical formula, but a different structure. There are several classes of isomer.

Structural isomers are molecules that have the same formula, but are connected in different ways. This can include branching of a chain, different positions of functional groups or the splitting up of a functional group, (for example, a carboxylic acid may become a ketone and an alcohol).

Conformational isomers occur when there is rotation around a single bond. It is less important for small, chain molecules as they are constantly rotating, but it is very important for bulky or cyclic alkanes.

This broad class of isomers includes any molecule with the same order of atoms, but different geometries, or different arrangement of the atoms in space. There are two different types of stereoisomers:

Diastereomers: stereoisomers that are not mirror images. These can include cis-trans (or E-Z) isomers, and molecules with more than one stereocentre.

To get stereoisomerism, you need a chiral molecule – one that is not identical to its mirror image. The most common example of chirality is your hands – your left and right hands are mirror images of each other, but you can’t superimpose them.

Chiral molecules can be spotted by looking for a chiral (or stereo) centre. This will be a carbon with four different substituents attached to it.

It is important to be able to distinguish between different enantiomers, so we use the R/S nomenclature. To designate R or S, you use the Cahn-Ingold-Prelog rules:

1. Prioritise the atoms directly attached to the chiral centre by atomic number.

2. If two or more atoms are the same, look at the next atom out, continuing until you find a point of difference.

3. Multiple bonds are counted as the same number of bonds to the same atom, (for example, a double bond to an oxygen counts as two single bonds to oxygen atoms)

Now, with the 4th priority substituent pointing into the page, draw a curved line from priority 1 to 2 to 3. If it is clockwise, the molecule is R, anticlockwise is S.

This molecule is S

Atoms and Electrons
Create a free website or blog at WordPress.com.